Jesus said, “It is not the healthy who need a doctor, but the sick.” Matthew 9:12

I may be wrong, but it’s occurred to me that some of our readers and supporters might not be that familiar with the nature of chemical dependency, or as it’s more commonly called “addiction”. I recently watched a very enlightening documentary on addiction called “Warning: This Drug May Kill You”. The documentary is available on HBO. For a while it was available at a Youtube link but since it’s paid content the links keep getting taken down from Youtube. If you’re not an HBO subscriber you can subscribe and watch the documentary plus get a month of all their content for free at this link. If you are an HBO subscriber you can watch it by clicking on the image below.

A few quotes from the film and support material:

“More people die from overdoses of opioid drugs than from car accidents or gun homicides.”

“While addiction can affect anyone, there has been a particularly sharp rise in mortality rates of young white people due to drug overdoses from prescription painkillers and heroin. One recent study even found that 90% of new heroin users were white. Increasingly, they are from middle-income and wealthy communities.”

“I firmly believe that there are so many people that are being prescribed opioids without any direction or support that have no idea what they are getting into” says father and husband Britt Doyle in the film “and then once they can’t get out of it, the shame and the inability to actually confront it and talk about it makes it worse because now all of a sudden they are an addict.”

“Addiction is a chronic brain disease, not a moral failing“. Stigma isolates those struggling with addiction and prevents them from seeking treatment.”

Please take just an hour of your time in the next day or two and watch this powerful documentary. Watch it first because it’s a cautionary tale about the danger of pain medications which are routinely prescribed on a daily basis to thousands of patients in the U.S., many of whom apparently have no idea of the dangers of addiction these medications pose.

I ask you to watch it also because it’s an enlightening look at how powerful drug dependency is and how extremely difficult it is to overcome. You’ll enter the lives of four people who could be your relatives, your friends, your neighbors. They may sit next to you every Sunday in church. They could be your daughter, your son. Your mother or your father.

After the disturbing images in the first 3 minutes you won’t have to watch any more addicts passed out or emergency room scenes. Instead you’ll listen to the loved ones of the dependent, people very much like yourself, all middle or upper middle class. From good homes and stable families. Stephany who was prescribed Oxycontin and Vicodin for kidney stones at 16. Wynne, a mother and wife who was prescribed opioid painkillers after her third C-section. And Brendan, who left the hospital after a routine surgery to remove a cyst with a prescription for opioid painkillers. All of them, within months would be utterly addicted to opioids.

I know this isn’t the kind of thing most of us really want to watch. We’re “aware of it” and would prefer to just stay aware. Not look too close. I wonder if, maybe somewhere inside of us we think this happens to “other kinds of people”. Your thoughts along those lines may change after watching this documentary.

And I hope they do. It’s been my conclusion after working for some time now with the chemically dependent, that they aren’t “other kinds of people”. They’re people just like you and me.

The men and women and young people we serve in our Jesus in the Streets Ministry are a little different, in that most of them didn’t come from solid homes, with stable incomes, and healthy families. Most of them come from poor, broken, and often deeply abusive backgrounds. Many of them suffer from profound traumas and many have in fact significant mental and emotional issues.

But each of them, after you get to know them, is as sweet and loving and good as Stephany and Wynne and Brendan. And you. They didn’t deserve this. And they’re not bound by this web of addiction because they are weaker or lazier or somehow less deserving of God’s grace than anybody else. Including you, my friend. Including you.

It’s so true what the documentary says: “Addiction is a chronic brain disease, not a moral failing“. Does that excuse their drug dependency? Of course not. But if a loving mother and beloved wife, a beloved son and daughter from families who had every available means to care for them and did indeed love and care very deeply for them, could nevertheless fall into the pit of addiction, how much more so someone who never even had the benefit of those blessings and that care?

Who are the sick who need help, the hurting who need mercy, and the sinners who need a Savior, if not these? And if you find it hard to sit for an hour and watch these sick and hurting whom Jesus died for, how much harder do you think it is to go to them, to reach out to them, to keep trying over and over and over again to help them? Aren’t these the people Jesus was saying we should go to?

Do you remember what happened just before the passage you read in the beginning of this post, and what Jesus said right after it?

On hearing this, Jesus said, “It is not the healthy who need a doctor, but the sick. But go and learn what this means: ‘I desire mercy, not sacrifice.’ For I have not come to call the righteous, but sinners.” 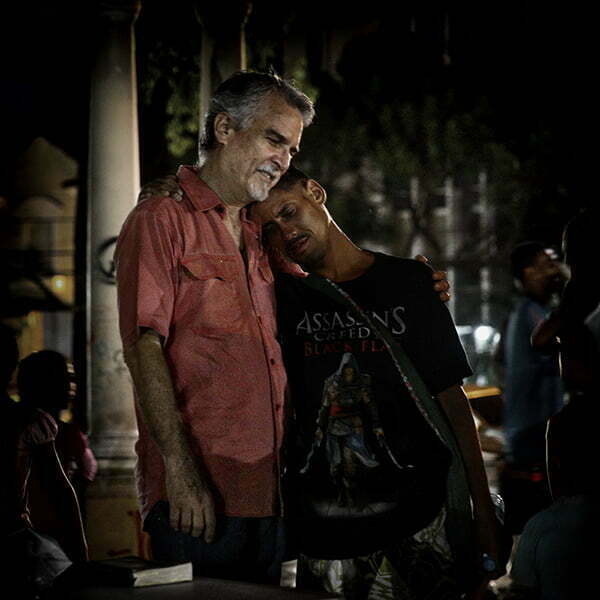 Thank you for your support and prayers.