I kind of noticed not a whole lot of people actually watched the video of last week’s interview with André. That’s okay. Maybe a post, a transcript and a subtitled video is too much. So, this week the transcript will be the post and the video will be there for whoever wants to watch.

So, below the image (which if you click on it takes you to this week’s video), you’ll find the transcript of the second part of the interview with André.

In last week’s video André, a former homeless drug user talked about his first encounter with our church in Derby Park. The night before he had seen a news report talking about social inequality in Brazil and all the different social groups, from the rich to the poor. He watched the whole news report, only to discover that his group, the homeless and chemically dependent, weren’t even mentioned. As far as society was concerned, they didn’t even exist. This left André feeling terrible.

And for most homeless people, whether they get it through a news report or from their daily living, the soul-crushing truth that eventually comes over them is that most people would just as soon not even see them. It’s not just that they are unwanted and unwelcome. For most people it’s as if they don’t even exist.

And then André showed up at the church in Derby Park… 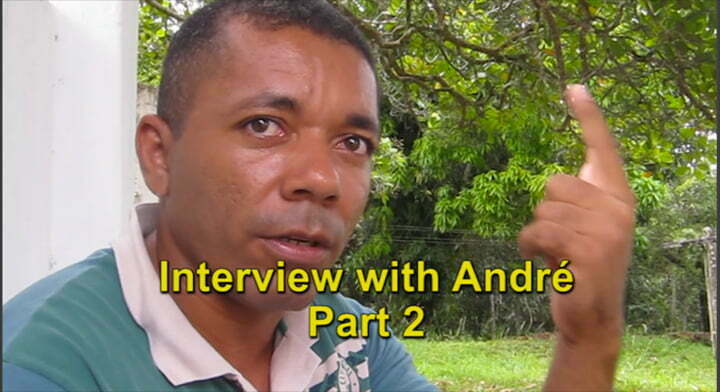 “I went to (the church in) Derby and heard you talking about how we are all equal. I asked myself ‘How can we all be equal if there is such obvious inequality?’
Then I understood that real equality only exists in Christ Jesus.
Because there is One who is above all, and all the rest are servants – everyone is under Him.

I started to wonder: ‘Why doesn’t the rest of society see it that way?’ A lot of questions started popping in my head – and I was still high, still under the effect of the drugs.

But on that morning the effects of the drug weren’t causing depressive feelings
I believe they caused an awakening to the Word of God.

I started to imagine how it would feel to be equal to others.
Then I looked at you and at other people who were there (in the church in Derby Park).
They were all people who seemed to have a good social status, and yet they were completely involved with us.

I thought: ‘What he’s preaching is the truth to him.
He really feels like us, he is like us and he isn’t faking it.’

All that the guys had said before about you, ‘Brother Dennis is really with us’. That all came back to me.

I knew that you knew each of them, and not just by name.
So then I began to see that in Christ, among people who truly profess Christ, there is equality.
I understood that the inequality that we see in society exists in the world outside.

But in Christ – who you said we could go to – this inequality doesn’t exist.
That meant that if I went to Christ I wouldn’t be unequal as society dictates
I could be part of a group that sees differently than the rest of the world.

The world sees inequality, but the Christians see unity in Christ.
Everyone is the same. Everyone is on the same level.
All are part of the Body and Jesus is the Head.

These things stayed in my head, in spite of the alcohol and the remaining effects of the crack I’d used the night before.

That Sunday morning was a different day in my life.
And the interesting thing is, you didn’t even see me that day, no one saw me – maybe you don’t even remember what you said.

But you can be sure I’ll never forget that day.
The news report I saw, with people evaluating the government of Lula (and talking about the inequality).

And after that I saw you and heard you saying that we are all equal,
that changed my life and started guiding me.

I started going to Christland (Cristolândia) and saw that equality you talked about in the church in Derby: equality in Christ.

I felt good at Christland. And I felt bad when I left there and was back on the streets using drugs.

When I was at Christland with the Christians, I felt equal to them.
And when I was out in the world, I was part of the inequality people talked so much about.
I decided to stay at Christland because there I felt good and close to Christ
Christ treats everyone equally. He sees everyone as the same.

He doesn’t see anyone bigger or smaller than others. No one is prettier or uglier.
And that stayed in my heart.
What happened at the Derby church that day,
thank God was a turning point in my life…”

Thank you for your prayers for André and so many others like him, men and women, precious sons and daughters of OUR Father.

Looking for hope, for direction, looking for the way home,
for homeless they are not…

“Trust me. There is plenty of room for you in my Father’s home… I’ll come back and get you so you can live where I Iive…” John 14:1-3 (The Message)

Don’t miss Part 3 of our Interview with André!