This is the final installment of our interview with André, a former homeless drug user who tells of his encounter with our church for the homeless in Derby Park, the effects that encounter had on him, and why he believes this kind of ministry is so vital.

André: “You sometimes tell me that you don’t know if the work you do has any real effect on people. One thing is certain: your work does have an effect on people. You may not see it with your human eyes, but God is working. You told me sometimes you question your work. But maybe if you had stopped, God would not have used you to say those things on that day.

And maybe I wouldn’t be here (at the Christland recovery center). You didn’t even know I was listening on that day, about how we are all equal. But what I want to say is that when I heard the news report on the day before, I felt like nothing.
The next day, I heard The Word and I left the worship in the Park feeling very important. And I didn’t feel very important because I felt like I was someone – because I knew I would still be a nobody to society – But I understood that I meant everything to God. I said to myself “I’m not what I’ve been thinking I am, I’m not what society tells me I am.” 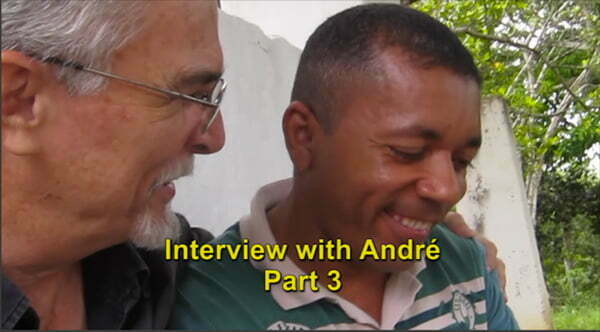 You don’t see people like society does. And you weren’t helping us out of pity, just giving out some soup to the hungry because they’re hungry. That’s not what Jesus Christ wants; He wants people on the streets doing His work. And many times when we need someone on the streets, there is no one. On that Sunday I needed that; I needed to hear that it made a great difference in my life.

So I don’t know what you’re thinking but I can tell you one thing, there may be many people who are using drugs. In the same situation I once was; and one day they will come to the church in the park feeling as empty as I did. When that day comes they will need you, showing not only with words but also with your life about Jesus Christ’s character.

If you only used words, I would notice – many people do that, people who give you some bread and turn and walk away thinking they did everything they could for you. They don’t think about what’s inside. Bread doesn’t change anything; it only masks the emptiness. But the Word of God brings life. It changed me. On that day, I arrived at Derby starving; I wanted to mean something to society. But I left the meeting knowing that I was someone very important to the Eternal God. To the God who owns everything.

After that day I still did wrong things, I still took drugs. I may not have accepted Jesus on that day. But I discovered Jesus accepted me on that day. Just the way I was… an outcast. On that day He told me I was important to Him through your words, and He showed me that through your life. After that I came to Christland and since then I’ve had one thought: I should do God’s work.

But not doing God’s work with big organizations. I want to do God’s work with people who really need it. Many times those who are close to you were the ones who need help the most. And sometimes The Word reaches those who are farther away – just listening like I was. I know that the real Gospel is supposed to be spread among people out there in that social level that no one cares about. I want to do God’s Work exactly like you do.

God may even use me to do many things now, I don’t know. Because that’s why he saved me. But, brother Dennis, if I have the opportunity to do what you did for me on that day, the way Jesus reached me, through your words and your actions, that alone would be great. Because THAT is the Gospel, THAT is the will of Jesus.

Campaigns and big events aren’t what the Gospel is about. It’s not about being in the spotlight. The will of Jesus is to be close to the hungry and needy when they need him. And on that day I wasn’t hungry or in need of food. But my soul needed comfort and God’s Word. On that day I was strengthened. God’s Word brought me life on that day.

You may not see, and you may not know about the effects that your words have on people. But speak and act, because God knows what He is doing through you. At this very moment maybe someone needs to hear those words. As long as there are people like me on the streets, people like you will be needed by Jesus to touch their lives. And there aren’t many people like you.

I thank God because one day you sincerely gave your life to Him. I’m sure that you told God you would do His Work. So I thank God for that decision because it brought me to Him. I might have never met Him, but on that day I did. But that was only possible because one day you gave your life to Him and accepted the heavy burden that this work is. It is a hard job, a heavy burden, a work that doesn’t seem to produce real results. But if we start to look at what the Holy Spirit does…

Dennis: André, thank you for your testimony. And your name..?
André: My name is André Barbosa da Silva, father of five daughters who are happy and eager to meet you.
Dennis: And I want to meet them!
André: Surely I will have many grandchildren and they will be proud of their grandfather. They will say: “My grandfather is a great man of God”, but they will certainly know about the other side of the story.

They will know that I used to live on the streets before I became a great man of God. And that one day a missionary gave his life to live amongst people who didn’t have much, changing the life of their grandfather through Jesus Christ. My five daughters and my grandchildren will be encouraged by me to go and do the work that you have been doing with the outcast. Because that’s what I want for me and for my daughters, and I want them to pass it along to my grandchildren as well.

The belief in the Lord Jesus Christ is hereditary. The apostle Paul said to Timothy that his grandmother Lois had a sincere faith. And her faith was passed onto his mother Eunice in a way that he had no doubt about it. The Christ that I discovered on that day because of you – the Christ that doesn’t discriminate amongst people, the Christ that decided to come down from Heaven and become just like me, that is the Christ I believe in. This belief will be passed onto my daughters and onto my grandchildren.

Dennis: And I want to see them there! This is my friend André. Thank you for your testimony. God bless you.”

Next week we’ll see how the Lord has been blessing André, and using him to bless others in his new walk in Christ.