Thank you for your prayers and thoughts about the recent news. The year 2018, culminating in the divorce in December, then the following months as I began to rearrange some important aspects of my life, was pretty challenging. The Lord has seen me through it all, as I trust He will with whatever lies ahead.

Because of the challenges of those times, and for some other reasons I’ll go into later, I haven’t been as faithful as I should be in sharing with you about the work the Lord has called me to here in Recife. Despite the lack of news, by His grace the work continues and I do believe He has graced our efforts with fruit worthy of the Kingdom.

I thought it would be good at this point to go back over some basics. I want to share with you just what we are doing here in the Jesus in the Streets ministry, why we are doing it, and what results have come from the investment of time in prayer, and all other forms of support you have given us over the years.

Today I ask you to watch a video, Part 1 of an interview with André. It’s a little over five minutes long. I first met André five years ago in 2014 when he completed the one year Christland rehabilitation program. André had actually been attending our worship services in Derby Park the year before in 2013. The contact with our church in the park was a turning point in André’s life and it was how he entered the Christland program.

As André mentions in the interview, we try to get to know everyone who attends our worship services in the park, but some keep their distance and we respect that. André was one of them, until that day in 2014 when he had completed his time at Christland. That’s when he introduced himself and told me what our ministry had meant to him. 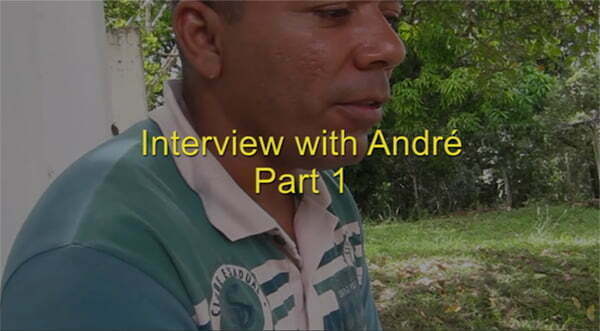 If you need it, here’s a transcript Interview with Andre part 1 Transcript.

I wanted you to hear André’s words, because he lived on the street for several years, lost his job, his family, was heavily addicted to drugs and sinking ever lower in the despair which grows like a cancer among the homeless and addicted. By God’s grace, through his Word, and that little church in the park, André discovered there was hope. Over the next few weeks I’ll share more of André’s story.

If you listen closely, you’ll realize this is a young man who was articulate, intelligent, and highly aware of what was for real and what wasn’t. And it mattered to him, as it does to many on the street. And there’s a reason for that…

For now I close with a quote from José Comblin, the man who most influenced me to look to the poor. – “The poor have always been the ‘other’. Today they are even more ‘other’ – more removed than in centuries before. … They are excluded geographically – to confirm their rejection, just look at where they live. … They have been eliminated from sight. Everything has been arranged so they cannot even look upon those who really ‘count’ in society.” – José Comblin, “The Way – an experiment in trying to follow Jesus”.

As you hear André talk about how he discovered he had no place in society, he didn’t “belong” anywhere, think about how you yourself, your group, your church “sees” the poor, the addicted, those “deep” in sin. Are you willing to “see” them? Are you able to “see” them and not look away, not avoid that first tenuous encounter, just making eye contact?

Ask yourself how you would feel, if everyone who passed you by throughout your day looked the other way, avoided even seeing you. Wherever you were, wherever you went. All day long. Day after day. No one would even look at you. How would that make you feel? Every. Single. Day.

Feeling a little uncomfortable? Good. If you’ve made it this far here’s a little treat. I leave you with a Franciscan Benediction…

May God bless you with discomfort

So that you may live deep within your heart.

May God bless you with anger

At injustice, oppression, and exploitation of people,

So that you may work for justice, freedom, and peace.

May God bless you with tears

To shed for those who suffer pain, rejection, hunger and war,

To turn their pain into joy.

And may God bless you with enough foolishness

To believe that you can make a difference in the world,

So that you can do what others claim cannot be done

To bring justice and kindness to all our children and the poor.

Discomfort, anger, tears, and foolishness. And grace and peace,

Don’t miss Part 2 of our interview with André!