By dennis on October 1, 2019 - In His Footsteps, Pray For These, Victories

If you didn’t catch them I would encourage you to go back and watch the videos of Parts 1, 2 and 3 of our interview with André. Or at least read the transcripts. André first came to our church in Derby Park in 2013. He was living on the streets of Recife, heavily dependent on crack and alcohol. Like many homeless men and women, he had lost his family, his job, and any sense of self worth.

The very night before he encountered our church in the park, he watched a news report on social classes in Brazil which convinced him that, not only was he homeless, as far as society was concerned he didn’t even exist.

And then, in Derby Park the next morning André heard the message of how in Christ we are all equal. How there is a Father and a family that wants you, no matter how far you’ve wandered, no matter how poor you are, no matter how low you have sunk.

Through our church in Derby Park André also heard about Christland. He entered their one year program of Christian Transformation, persevered, and at the end of that year was united with his Lord in baptism.

That was the same day André and I met. He knew me, already knew a lot about our ministry and our church in the park, but I didn’t know him. And he really wanted to tell me what he had seen and what a difference our ministry had made in his life. That’s where those interviews came from. 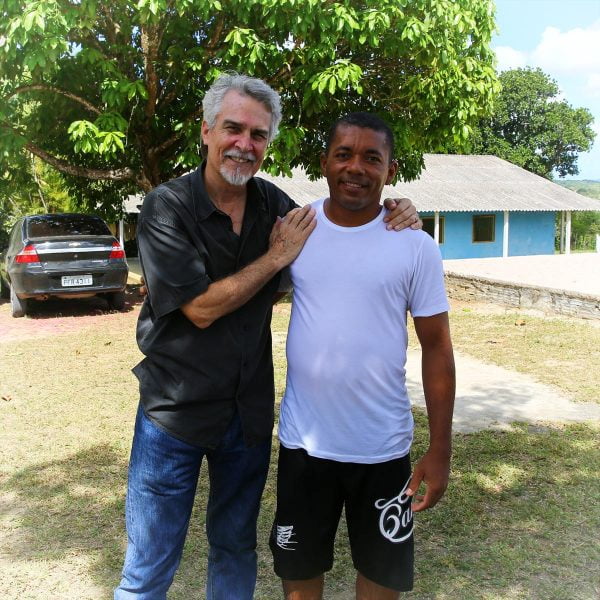 In the last interview André talked about his family, how he wanted to take his daughters to Derby Park. He wanted them to see where he had heard about this Jesus who loved him so much, about the family and the Father who wanted him. And he went on and talked about his grandchildren and his dream they too would one day follow Jesus.

As I listened that day to André’s dreams for his family, I thought to myself he might be in for a big disappointment. After struggling to come back from life on the street and the pit of chemical dependency, one of the toughest challenges these men and women face is dealing with family. Many family members want nothing to do with them. The craziness of that life often burns bridges that can never be rebuilt.

In André’s case, his partner Luciana, with a son from a previous marriage and five daughters with André had gotten fed up. She wanted no more of him and the downward spiral he was in. In despair, Luciana had also begun to descend into alcohol abuse.

One of the things I appreciate so much about Christland is their understanding of this terrible dynamic, and their determination to not only help men and women get back on their feet, with vocational training and job placement, but most importantly in bringing healing to wounded families, restoring fellowship, and reuniting loved ones.

And so it was that in April of the following year, with Christland’s help André and Luciana, who never had the means or the guidance to get formally married, pledged their vows of faith in Christ and in one another, and were given a real wedding ceremony by the brethren at Christland.

It may seem I’ve devoted a lot of time to one man’s story. And we’re not done yet. There’s more to come. For now, think on the words engraved on the ring given to Oscar Schindler, who after saving so many lives, still felt so badly that he hadn’t done more… “Whoever saves one life saves the world entire”…

Is there really only one life saved there? How many others do you suppose the Lord may be planning to reach in reaching André?